Feet – large ones, wide ones and especially small ones, are very important to the Kilt Socks UK team (part of Endrick Trading Ltd) which is why we are so proud to be helping UK charity, Sal’s Shoes.

Sal’s Shoes protect the feet of tens of thousands of children by sending pre-loved shoes from the UK to places where they are most needed.

For 300 million children around the world shoes are a luxury. Without them, they are extremely vulnerable to infection by parasites, such as hookworm; while injuries to the feet and ankles can lead to ulcers and other conditions which are almost always left untreated.

Without shoes, many children are not permitted to attend school.

Being parents ourselves, we know the importance of shoes and also how quickly, children can grow from one pair to another, without wearing them out.
Sal’s Shoes is based on a wonderfully simple idea.

“Three years ago, when faced with a collection of our son Sal’s outgrown shoes, I sought out charities who could donate them to those most in need. Surprisingly, there wasn’t a single organisation that could tell me where Sal’s pre-loved shoes would actually end up.”

So CJ decided to cut out the middle man.

“Having grown up in Africa, and with a network of family and friends scattered all over the world, I decided that if no-one was willing to tell me where exactly Sal’s shoes would end up walking again, I would deliver them there myself. A parcel was sent to a friend overseas, who distributed them on a children’s oncology ward and sent back a photograph of a child wearing Sal’s first pair of shoes; Sal’s pair of shoes had become another’s.”
After initially collecting more outgrown children’s shoes from family and friends, word spread and soon I was inundated with pairs of barely worn shoes; ‘Sal’s Shoes’ had been born.
How did we get involved?

If there is one thing we know about it, its transporting boxes of goodies worldwide and we saw an opportunity for us to get involved. Luci sent a call out to our local community to bring us their pre-loved shoes, and the people of Balfron answered.

Take a look. We filled two large boxes with pre-loved shoes and sent them to Sal’s Shoes. 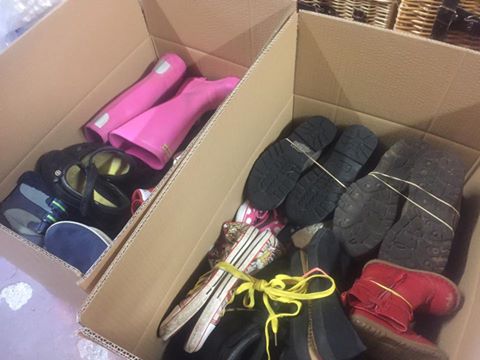 If you would like to be involved, you can find a location collection point here. Or if you’re near to Balfron in Scotland, drop us a line. We’re still collecting.

For seasonal offers that are good for your sole, please keep in touch.

Father’s Day Gift Ideas. Not all socks are the same.

I am looking for …

*Available on orders for in-stock items placed by 1pm

*Available on orders for in-stock items placed by 1pm

The prices quoted on our website include VAT at the current rate. If the order is being dispatched to a non-E.C. country then the VAT will be deducted.

The checkout will automatically calculate the total according to the destination.

Responsibility for local taxes and duties on orders sent VAT free, lie with you the customer.

For seasonal offers that are good for your sole, please keep in touch.

Receive seasonal savings by email.
Great for birthday, anniversary and Christmas gifts.
Your Privacy is important to us. (Privacy Policy below) Unsubscribe at any time.
This site uses cookies to provide you with a better service. For more information, please see our Cookie Notice. If you don't agree to our use of cookies, please navigate away from this site now.OkCookie Policy